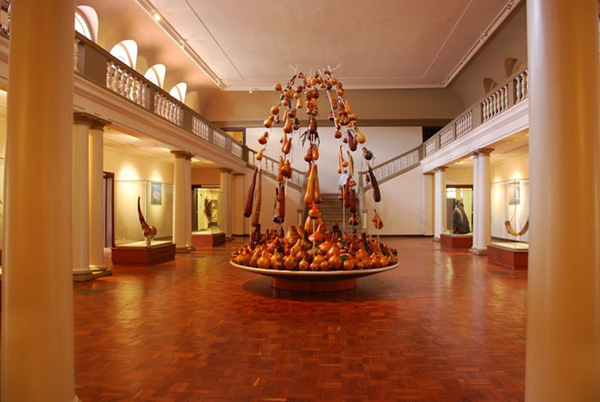 The Museum aims to interpret Kenya’s rich heritage and offers a one stop for visitors to sample the country’s rich heritage both for education and leisure. In addition to the museum, visitors are treated to a variety of shopping and dining facilities, as well as botanical gardens that offer a serene environment.
The museum is open on all 356 days throughout the year from 0830hrs -17300hrs.Nairobi National Museum is located at the Museum Hill, approximately 10 minutes drive from the Nairobi city centre accessible both by public and private means. Built in 1929, this is the flagship museum for the National Museums of Kenya, housing celebrated collections of Kenya’s History, Nature, Culture and Contemporary Art.

The Museum was initiated in 1910 by a group of enthusiastic naturalists under the then East Africa and Uganda Natural History Society [currently the East African Natural History Society (EANHS)], who needed a place to keep and preserve their collections of various specimens. The first site for the museum was at the present Nyayo House, which later became too small and a larger building was put up in 1922 where the Nairobi Serena Hotel stands today.

In 1929, the colonial government set aside land for a museum construction at Museum Hill which was officially opened in September 22nd 1930 and named Coryndon Museum in honour of Sir Robert Coryndon, one time Governor of Kenya. In 1963 after independence, it was re-named the National Museum of Kenya (NMK).

On October 15th 2005, the Nairobi Museum closed its doors to the public for an extensive modernization and expansion project the outcome of which was an impresive and magnificient piece of architecture that puts it in competition with other world- class museums. The museum later re-opened in June 2008 as the Nairobi National Museum, and continues to draw visitors from all walks of life in appreciation of Kenya’s rich heritage.

The artworks and materials used in the fabrication of outdoor sculptures, the landscaping and the botanic gardens, link to the four pillars of Kenya’s national heritage i.e. nature, culture, history and contemporary art.

In addition to offering visitor’s with Kenya’s rich heritage, the museum is also well known as a unique events venue, for the appreciation of Kenya’s heritage amidst workshops, cocktails, conferences and other functions. For more information visit