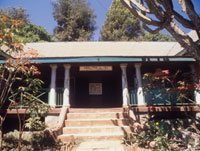 The creation and further the establishment of Meru museum as one of the regional museums of the National Museums of Kenya was catapulted by a need to conserve the culture and traditional practices of the locals, the Meru speaking people.

Meru museum originated in 1974 in an old historic building that was vacated by the District Commissioner, whose office it had been since the colonial days. The building housing the Meru museum dates back to 1916. In the colonial era it served as an administrative node in the Mount Kenya region. The museum was a joint effort by the Meru Municipal and County Councils, together with the National Museums of Kenya in creating an attractive and formative center useful to the local people and to visitors.

Aspects of the cultural and diverse history of the Meru people are well illustrated by the numerous displays. Two rather unusual amenities of the Meru museum are a garden of indigenous medicinal shrubs and herbs together with a theatre. A compound of traditional huts has been constructed on the grounds, which are included in tours of the museum. An outdoor platform for dancing and musical programs along with sales kiosks complete the exterior construction.

The exhibitions serve largely in stimulating particularly among the young generation awareness of and appreciation for their cultural heritage and that of other communities as well as serving as an introduction to the region for visitors. 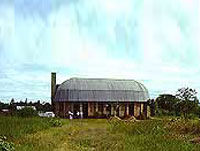 Thirteen kilometers north of Meru town is Njuuri Ncheke the traditional high court for the area. Construction of the building began in 1962 on the site where elders met under trees, but due to differences between the Meru County Council (which was responsible for its construction) and the constructor, the building was abandoned before its completion.

Nonetheless, it was and is still used once a year by a Meru Council of elders as the venue for settling disputes arising within Meru communities which could not be resolved by the smaller traditional councils(njuuri). The smaller njuuri houses nominated their members to Njuuri Ncheke, the high court of the Meru people, which catered for the entire Meru community.

The Njuuri Ncheke house is located in Nyambene District, near the road leading to Meru National Park. Its shape is oval representing the traditional Meru architecture. In 1989, the building was entrusted to the NMK. The name Njuuri Ncheke is derived from the ritual oath that was taken by all the members of the traditional council; only the elders (judges) of the court knew this sacred and secret oath.

There are several njuuri houses (as they were popularly known) within one sub- location, and they deliberated over local cases within that area. These smaller njuuri were widely spread all over the former Meru District (currently Tharaka Nithi District), Nyambene and Meru Central Districts. Today the small njuuri houses are active only in Nyambene District.

Some of the cases dealt with by the sub-locational (smaller) njuuri houses were farm boundary disputes, personal debts and small theft cases. The members of the court decided on what type of punishment was to be imposed, and these ranged from ritual sacrifices to even death. The cases deliberated by the smaller njuuri houses were normally settled to the satisfaction of both parties. If one of the parties was not satisfied, he was allowed to appeal to the wider njuuri system: some members of all the njuuri houses in the location could be nominated to sit and listen to the appeal.

Njuuri Ncheke members met once a year to make new laws or review the old ones; it also determined bride prices. The smaller njuuri houses also used these laws, and it ensured uniform judgements throughout Meru. It was also the duty of the njuuri to bring rains.