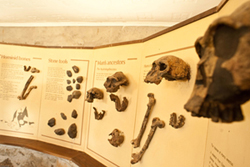 In the language of the Gabbra people who live near the site, the term Koobi Fora means a place of the commiphora and the source of myrrh, which is a common plant in this hot and arid area.

Research work on the site began in 1968. Hominid fossils from the Plio/Pleistocene of Eastern Africa have been recovered from seven localities of which the most extensive is that of East of Lake Turkana. This Koobi Fora site comprises approximately 700 square miles of fluvial and lacustine sediments representing a broadly continuous sequence of deposition from the Pliocene (5.0 million) to the Early Pleistocene (1.0 million) years old.

Since June 1968, more than 70 hominid fossils had been recovered. One hominid model; Australopithecus Sensu Lato, has been documented as a chrono species of over a period of 2 million years old. During this period according to researchers, there was little significant morphological change as evident in the element preserved both at Koobi Fora and elsewhere in East Africa.

Prior to 1960, most of the evidence for the evolution of man during the early Pleistocene was confined to Southern Africa. The greatest body of evidence for early hominid development has been obtained from the large site in Northern Kenya. Between 1968 and 1972, a total of 87 fossil hominid specimens were recovered. Stone artifacts have also been obtained in the site not forgetting that other animal plant fossils have also been discovered. For example several taxa of giraffines have
been yielded.

Upto 1994, about 200 separate hominid and numerous animal skulls had been found, more than the rest of the world?s fossil sites have produced in 60 years. There are Bandas for night accommodation, which go for Kshs.1000 per person per night.