Karen Blixen Museum was once the centre piece of a farm at the foot of the Ngong Hills owned by Danish Author Karen and her Swedish Husband, Baron Bror von Blixen Fincke. Located 10km from the city centre, the Museum belongs to a different time period in the history of Kenya. The farm house gained international fame with the release of the movie ‘Out of Africa’ an Oscar winning film based on Karen’s an autobiography by the same title.

The Museum is open to the Public every day (9.30 am to 6pm) including weekends and public holidays. Visitors are encouraged to be at the Museum by 5.30.  Guided tours are offered continuously.  A museum shop offers handicrafts, posters and postcards, the Movie ‘Out of Africa’, books and other Kenyan souvenirs.  The grounds may be rented for wedding receptions, corporate functions and other events. 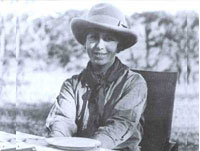 The Museum was built in 1912 by Swedish Engineer Ake Sjogren. Karen and her husband bought the Museum house in 1917 and it become the farm house for their 4500 acre farm, of which 600 acres was used for coffee farming. Their marriage failed after eight years and in 1921 the Baron moved on and left the running of the farm to Karen. Karen lived at the house until her return to Denmark in 1931. The house farm was bought by Remy Marin, who broke the land into 20 acre parcels for development. Subsequent development created the present suburb of Karen. Records indicate that a Lt. Col.G. Lloyd, an officer of the British Army bought the house in 1935 and lived there until his death in 1954, when it passed to his daughters, Mrs. G. Robersts and Lavender Llyod.  A transfer of title to Mrs. J.P Robson and Mrs L.B. Hyde is in City Hall records in 1956.  The house was sporadically occupied until purchased in 1964 by the Danish government and given to the Kenyan government as an independence gift.

The government set up a college of nutrition and the Museum was initially used as the principal’s house. In 1985 the shooting of a movie based on Karen’s autobiography began and the National Museums of Kenya expressed acquired the house for the purpose of establishing a Museum. The Museum was opened in 1986. 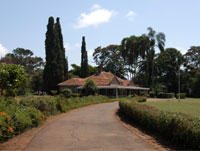 Karen also known by her pen name Isak Dinesen was born at Rungstedlund in Denmark on 17th of April 1885 as the second child of Wilhelm and Ingeborg Dinesen’s five children. She came to Africa in 1914 to marry her half cousin and carry out dairy farming in the then British Colony of Kenya. Her husband had however changed his mind and wanted to farm coffee. Her uncle Aage Westenholz financed the farm and members of both families were share holders. The coffee farm did not do well, suffering various tragedies including factory fire and continuous bad harvest. After her divorce, Karen was left to run the financially troubled farm on her own, a daunting task for a woman of that generation. She fell in love with an English man, Denis Finch Hatton, and his death in Tsavo in 1930 coupled with the failed farming left Karen little choice but to return to Denmark. She turned to writing as a career following her departure from Africa and published to increasing acclaim such works as Seven Gothic Tales(1934) Out of Africa(1937) and Babette Feat (1950). She died on her family estate, Rungsted, in 1962 at the age of 77. 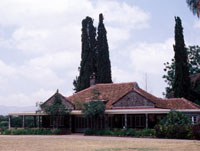 The Karen Blixen house meets three of the customary criteria for historical significance. First, it is associated with the broad historical pattern of European settlement andcultivation of East Africa. Second, it is associated with the life of aperson significant to our past as the home of Baroness Karen Blixen from 1917 -1931. As such, it served as the setting and basis of herwell known book Out of Africa, written under the pseudonym Isak Dinesenand as a gathering place for other well known personalities of the period. Third, the building embodies the distinctive characteristicsof its type, period and method of construction. The house’s architecture is typical of late 19th century bungalow architecture,including the spacious rooms, horizontal layout verandas, tile roof and stone construction typical of scores of residences built throughout European suburbs of Nairobi in early decades.

The chronology of the house begins with its construction in 1912 by the wealthy Swedish civil engineer, later honorary Swedish consul to Kenya, Ake Sjogren. It served as the main residence on his Swedo-African coffee company , an estate of over 6,000 acres. The house was soon visited while on safari by the Danish count Mojen Frijs, who upon his return to Denmark persuaded his cousin to seek their fortune in Kenya.Baron Blixen acquired part of the estate in 1913 and the remainder in 1916. Karen Blixen called the house “Bogani” or “Mbogani” meaning a house in the woods, and occupied it until 1931.

By1985, with renewed interest in Karen Blixen occasioned by the film production of Out of Africa, an agreement was reach with the collage for the house to become part of the National Museums of Kenya. Many pieces of furniture that Karen Blixen sold to Lady McMillan on her departure were acquired back and constitute part of the exhibition in the Museum. The Museum house remains a serene environment that seems to belong to the past, surrounded by a tranquil garden and indigenous forest, with a splendid view of Karen’s beloved Ngong Hills. She honours the hills with the phrase ‘I had a farm in Africa at the foot of the Ngong Hills’.